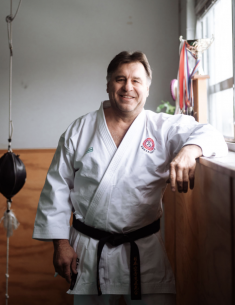 The club was formed in 1985 by Roy Tippenhauer. Sensei Roy originally trained in Comox in the Shito-Ryu Itosu-Kai organization. The Comox club was run by Sensei Peter Hilhorst who was with Kei Tsumura’s group from eastern Canada. In or about 1984 Sensei Hilhorst sought out a man named Akira Sato of Vancouver B.C. Sensei Sato became our Sensei around 1984 and made regular visits to Vancouver Island to give seminars and do belt tests. in 1993 when Ryushu Sakagami died the club followed Sensei Sato’s recommendation that we follow the former master of Itosu-Kai, a Seiko Suzuki, and become members of the newly founded Shito-Ryu Seiko-Kai. As time passed our Akira Sato became Master Akira Sato of the Seiko-Kai organization. In 2017 Akira Sato formed his new organization, Shito-Ryu Sato Ha Rengo Kokusai karate organization. The organization Hombu dojo is in Vancouver Canada and has approximately 15 countries that belong to the organization.

Sensei Roy Tippenhauer holds a 7th degree Black Belt in Shito-Ryu Sato Kai and a 4th degree black belt and chief instructor in Canada in Sato Ha Rengo Kokusai kobudo. He is a former provincial and national champion. He holds an NCCP level 4 multi sport (advanced coaching diploma in high performance coaching from the National Coaching Institute in Victoria), a certified Comp Developement level coaching certificate (NCCP) and is an NCCP learning facilitator and evaluator. He holds a Provicial Level refereeing certificate. He began his training in 1980 and received his 5th degree rank in 2001. He opened the Campbell River Shito-Ryu Club in Campbell River in 1985. Sensei Roy is focused on both tournament karate and traditional karate. His tournament and coaching career success has brought Campbell River Shito-Ryu a well deserved reputation.

Karate-do has a rich and colourful history. In popular culture, it has been portrayed as a tough, rough and direct martial art characterized by the white uniform and the legendary ‘black belt’. While all of these might be true characteristics of most Karate styles, there is much more to discover about its history and roots in ancient oriental culture and thought.

To properly understand its origins, it is important to look at Karate in a broader context. Much of what we now call ‘Karate’ or ‘Empty Hand’ came from China. Sometime in the mid-1300s the Ryukyu, a chain of islands lying between China and southern Japan, became a centre for trade and commerce. Known as Okinawa today, these islands developed a distinct culture, caught between the political and cultural trade routes of various cultures and peoples. Trade and intellectual life were primarily driven by the Chinese, however, until Japan took control in 1609 under the Shimazu clan and finally annexed it in 1875.

It was in this confluence that Karate and later Shito-Ryu Karate was born. While Japanese culture and political influence remained paramount, the old traditions were always in the background: Chinese masters continued to travel to Okinawa on business, leaving behind a deep and significant tradition in the martial arts. Known among Okinawans as ‘Te’, or ‘Chinese Fist’, masters would secretly pass their knowledge from generation to generation, perhaps in large part because Chinese culture and influence were not germane to the politics of mainland Japan.

In Okinawa towns by the 1800s, three distinct but closely related styles could be discerned in each of the main towns in Okinawa: Shuri (the old capital), Naha (the modern capital) and Tomari. In truth, while each style or group was centred around one or two prominent teachers who would have their inevitable differences, they were rooted in similar traditions and influences and certainly knew each other very well. All three towns were within a five-kilometre radius of one another!

Any history of Shitoryu Karate, however, must begin and end with its founder, Kenwa Mabuni. Born in Shuri on Okinawa in 1893, Mabuni Sensei was a descendant of the famous Onigusukini Samurai family. Perhaps because of his weak constitution, he began his instruction in his home town in the art of Shuri-Te at the age of 13, under the tutelage of the legendary AnkohYasutsune Itosu (1813-1915). He trained diligently for several years, learning many katas from this great Master. It was Itosu who first developed the Pinan kata, which was most probably derived from the ‘Kusanku’ form.

One of his close friends, Sensei Chogun Miyagi (founder of Goju-Ryu) introduced Mabuni Toitotsu to another great of that period, Sensei Kanryo Higashionna, and began to learn Naha-te under him as well. While both Itosu and Higashionna taught a ‘hard-soft’ style of Okinawan ‘Te’, their methods and emphases were quite distinct: the Itosu syllabus included straight and powerful techniques as exemplified in the Naifanchi and Bassai kata; the Higashionna syllabus, on the other hand, stressed circular motion and shorter fighting methods as seen in the popular Seipai and Kururunfa forms. These were the two main influences on the development of Mabuni Sensei and what he would later call Shito-Ryu. In fact, he derived the name for his new style from the first Kanji character in their names, Itosu and Higashionna. higashionna
Although he remained true to the teachings of these two great masters, Mabuni sought instruction from a number of masters, including Seisho Aragaki, Tawada Shimboku, Sueyoshi Jino and Wu Xianhui (a Chinese master known as Go-Kenki). In fact, Mabuni was legendary for his encyclopaedic knowledge of kata and their Bunkai applications. By the 1920s, he was regarded as the foremost authority on Okinawan kata and their history and was much sought after as a teacher by his contemporaries. There is even some evidence that his expertise was sought out in China, as well as Okinawa and mainland Japan. As a police officer, he taught local law enforcement officers and at the behest of his teacher Itosu, began instruction in the various grammar schools in Shuri and Naha.

In an effort to popularize Karate in mainland Japan, Mabuni made several trips to Tokyo in 1917 and 1928. Although much that was known as ‘Te’ (Chinese Fist) or Karate had been passed down through many generations with jealous secrecy, it was his view that it should be taught to anyone who sought knowledge with honesty and integrity. In fact, many masters of his generation held similar views on the future of Karate: Sensei Gichin Funakoshi (founder of Shotokan), another contemporary, had moved to Tokyo in the 1920s to promote their art on the mainland as well.

By 1929, Mabuni had moved to Osaka on the mainland, to become a full-time Karate instructor. With the support of Sensei Ryusho Sakagami (1915-1993), he opened a number of dojo in the Osaka area, including Kansai University and the Japan Karatedo Kai dojo. To this day, the largest contingent of Shito-Ryu practitioners in Japan is centred in the Osaka area.

In an effort to gain acceptance in the Japanese Butokukai, the governing body for all officially recognized martial arts, he and his contemporaries decided to call their art ‘Karate’ or ‘Empty Hand’, rather than ‘Chinese Hand’. He published a number of books on the subject and continued to systematize the instruction method. In his later years, he developed a number of formal katas, such as Aoyagi, for example, which was designed specifically for women’s self-defense. Perhaps more than any other Master in the last century, Mabuni was steeped in the traditions and history of Karate-do, yet forward-thinking enough to realize that it could spread throughout the world.

Our group follows the tradition of Mabuni’s teachings through Grand Master Akira Sato and previously Seiko Suzuki who began his career in Karatedo in 1954 under the tutelage of Ryusho Sakagami. He was renowned for his technical knowledge and his ability to grasp new techniques and concepts very quickly. Above all, he became known for his smooth and powerful technique.

After Sakagami’s passing in 1993, Suzuki Sensei decided to found his own style, the Suzuki-ha Shito-Ryu Nihon Karatedo Seiko-kai. Headquartered in Japan, there are Seiko-kai dojo in Canada and the United States, Venezuela, and Argentina, as well as Ghana, India, Sri Lanka, Nepal, and the Philippines.

In 2017 Akira Sato decided to start his own organization, Hombu dojo being in Vancouver Canada with approximately 15 other countries joining.